Seaweed Scarf Workshop or Underestimating the Challenge of Shingles

Two Saturdays ago I taught a workshop to five students I call the Seaweed Scarf (the workshop, not the students).  It was scheduled from 10 to 4 PM.  We had the season’s worst blizzard the day before, and my fingers were crossed all day, hoping that two students traveling from different parts of New York City would make it.  I had ordered space dyed superfine merino and silk top for this class, and stashed them away so students would have first choice of colors.

There were a few surprises for me over the course of the workshop.  Things I hadn’t anticipated.

I attempted to keep things simple by calculating the weight of wool we’d need for the project, in advance.  I referred to a notebook where I’ve logged the weight and dimensions of scarves I’ve made, and notes to remind myself what I thought about the results.  I chose the scarf I had noted as my “favorite weight” and planned for this workshop accordingly.  I was shooting for a lightweight, evenly felted scarf of space dyed wool with a layout of silk top on the surface.

My prototype Seaweed Scarf was wet felted of a hand carded blend of merino top in greens, with space dyed silk top roving on the surface.

I had everyone go through the exercise of calculating their layout size, based on the desired finished scarf dimensions, and we marked the area with painter’s tape or marking pen on their work tables.

I showed them the wool and silk, telling them that they had to arm wrestle for the colors they wanted (it wasn’t necessary).  Everyone divided their wool into four equal parts, one for each layer.   I demonstrated my method for making fine, even shingle layers, and let them begin.  Part way through the first layer, it became clear that there was no way they would have enough wool for all four layers.  Even though they were trying to make their layers thin, it was not going to be enough.

We switched to Plan B:  Every one was given more wool, and some students decided to make their scarf with three layers.  Because we didn’t have more wool to match all the scarves, some felters used merino wool in a solid color, and laid it out in the center layer to make the color transition subtle.

Some also chose the option to lay out only three layers, instead of four, as the day grew longer.   They were willing to accept uneven shrinkage, and the results proved that four layers laid out in alternating directions does give more even shrinkage than three layers (because two layers wind up in one direction, and only one layer will be in the opposite direction). 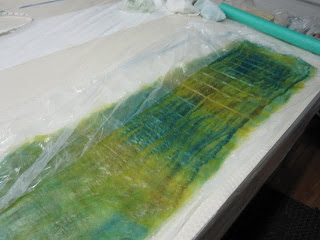 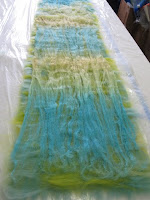 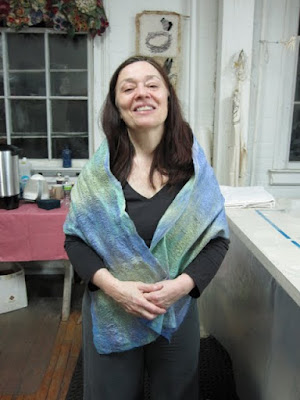 It took a very long time to carefully lay out this project.  After the wool lay out was finished, we laid out the silk layer, and that took preparation time.  My two local students decided to return a second day to finish, rather than rush.  I didn’t anticipate it would take so long.  I hadn’t recorded that in my notes!  In truth, this “scarf” is more of a wrap size, I don’t know why I hadn’t anticipated that it would take extra time.  I had some very meticulous beginners, their results were stunning and everyone was happy.

It was a good reminder to me that felt can not be rushed to fit our time frame; and that it’s important to go willingly with the flow in the end- it’s likely others will flow along with you.

A big thank you to my flowing students for their great attitude and creative persistence.