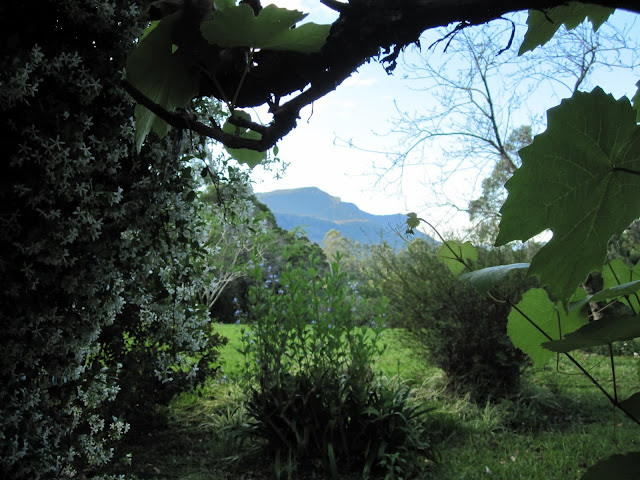 I finally made my first trip toAustralia to visit my sister Polly!
I admit, I did not expect to fall in love with Australia.  But I did.  I fell in love with the sounds of the rain forest chorus in the morning, possums thumping on the tin roof, the deafening din of cicadas that would stop as abruptly as it began, the squawking of wild turkeys and the quarreling of galahs.

How it All Began

I did a stint at California College of Arts and Crafts inOakland, California in 1972 while Polly and Geoff Stirling were living in San Francisco.  They recently moved there from London, and I took full advantage of the opportunity to spend nearly every weekend with them.  I’d hang out with Geoff and the other street artists at UnionSquare as he sold Polly’s leather bags and earthy hand dyed dresses while she moonlighted as a cocktail waitress at the Sir Francis Drake Hotel, saving up for their move to Australia. When she’d left home for college I was seven, so there was little opportunity for over familiarity to erode my idolatry of her.  Polly and Geoff moved to Australia that Spring.  She eventually left leather work behind for a new love, feltmaking, and never looked back.  She raised her family in Australia, and it became her homeland.

The rest of our family cultivated asort of love-hate relationship with Australia.  We proudly learned thelyrics to Waltzing Matilda and Click Go The Shears fromour Aussie in-law Geoff.  Familiarity with Australiananimals and culture became part of our collective knowledge, thanks the children’s books Polly sent.  My favorites were Wombat Stew, Possum Magic,Koala Lou andThe Magic Firesticks.

There was no shortage of shocking tales shared about Australia’s exotic side.  Geoff’s Mum spotted a carpet snake dangling from the rafters overtheir wedding table.  A python shed its skin in the toybox.  The undomesticated “kitchen lizard” pawed at thedoor to go out.  A guest tried to captured a spider on the bedroom wall but couldn’t fit its legs under the the drinking glass.  If I had been able to afford thetrip when my kids were growing up, I’m not sure my motivation waskeen.  For all those years we saw Polly and  her family way too infrequently (at six year intervals for ages), and when she did come home- our mother got fiercely patriotic.  Australia had stolen her first born.

I Booked It
Inspired by Polly’s felting workshops, I gradually became a felt maker myself.  Not exactly following in her foot steps, but dancing close behind.  Finally my own kids were on their own, and I started to get seriousabout making the trip down under.  I screwed up my courage and booked my ticket, along with our sister Susan, and we rendezvoused with Polly in Sydney on October 20. 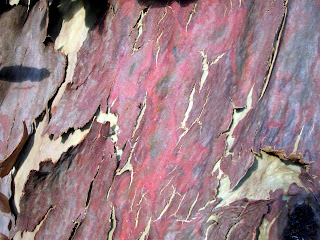 Thistrip far exceeded any expectations I ever had.   It took a fewdays before I was relaxed enough to meet the kitchen lizard, and I never stopped being watchful for snakes, but I was proud that the big HuntsmanSpider on the ceiling didn’t rattle me, and the colony of huge, chattering fruit batsdangling from a fig tree in the Sydney Royal Botanic Gardens were adorable!  I was delighted to see the mark of a snake track (small) in the red sand in the Center.

The whole place was one giant excitement for me.  Every sound, every sight.  Birds, bats, pods, bark, blossoms, branches, trunks and Roo Bars. 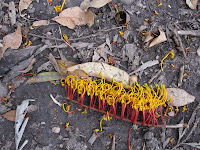 A weekafter we arrived I gave a two day Art Felts workshop at Polly’sWild Turkey Studio in Lilian Rock, NSW, Australia.  I was really nervous about teaching around Polly;fear of failure or something, but it was a wonderful experience.  Polly, Sue and I pitched in and cleaned up the studio for the event.  It was the first time I’ve been in a studio that can be invaded by Turkeys.  For real!  We had to cover the wool I laid out for the class, or the Wild Turkeys would get into it and make a mess over night.

My students were joyous at being able to spend a few days felting, and spirits were high.  Their familiar affirmation was of appreciation for the opportunity to have exclusive time to be creative.  A couple of students took off in directions that diverged from the topic.  That wasn’t unusual, and I found my sense of humor to finesse the situation, and managed to cajole more experimentation with my suggestions.  I needed to feel useful!

Ourgood friend (and advanced feltmaker) Sachiko Kotaka was in my class. Iorganized felting workshops for Sachiko to teach in the US in thesummer of 2010.  I know her well enough to expect her to do her own thing.  I could guess from the odd shape of her felt that she had an ulterior motive.  As fiber was flyingbeneath her fingers, she’d respectfully keep reassuring me that shewas, indeed, listening!  When she wrappedher finished “art felt” around her waist, my suspicions wereconfirmed.  Youcan’t keep a good felter down, nor should you!

My teaching suggestion arejust that, but it isan interesting juggle when you find yourself cajoling astudent to try it your way. Usually I tell students that I amteaching the way I makefelt, and that I will be extra fussy with the details. If they arebeginners, I suggest that in time they will find their own way. Ijoke that techniques I might cringe at may work perfectly well. Ifthey continue to do things the same way, in spite of my corrections,I might ask if they want me to keep correcting them. I want todetermine if the lesson just hasn’t sunk in, or if they are choosingto do it differently.

As everyone knows, Ilearned how to make felt from Polly.  She was my biggest supporter whenI decided to rent a studio and she gave me the best advice: just keepworking.  There is no short cut to learning.  I’ve done that, and it is interesting to see how differently we do things now, our methods have both evolved.  It is essential to find what is comfortable for your own body when you work.  I know I have a different teaching style from Polly.  She is more laid back, I’m more detailed.  Maybe more wordy.  Her approach is the opposite of compulsive.   But boy does she have energy, and endless creativity.  She is very inspired.

Felting Moved to the Back Burner
A top priority for my visit had been to spend time felting and dying with my sisters, but it didn’t work out. We did discuss technical aspects of garment making, I took notes and I tried on some of her pieces (fun!) butthere just wasn’t enough thinking time for me to actually felt there.

Sue did get Polly’s help to start on a garment, and I took notes andphotos, but I just can’t work well under pressure.  I need lots of thinking time…

What we did instead was to pack up Polly’s car for departure right after my students left, drove to Brisbane where we meet up with our dear friend Linda Fairbairn (of Journey Jottings) and the four of us flew into Yulara at the Red Center of Australia.  Then we drove a camper bus half way across Oz to Cairns near the Great Barrier Reef.  It was a spectacular spur of themoment ten day side trip.  All four of us we were in awe of the sensuous landscape, no words or photos can begin to do it justice.

11 Responses to AFTER OZ